When I began to choose the work for “Fix Ya Face!” I approached it with the idea that any image which alludes to the likeness of a face could be considered a portrait. Little did I know, as John Gere states, art historians and critics have come to define a portrait as an image “in which the artist is engaged with the personality of his sitter and is preoccupied with his or her characterisation as an individual.” This took me by surprise. My definition of portrait, apparently not an academic one, completely misled me to select all of the pieces for “Fix Ya Face!” with them in mind as “portraits”. Upon review, however, it would appear that out of the thirty-six selected artworks, only four are portraits. Inevitably, I learned that this was not the portrait exhibition I thought it was going to be and the solution to my ignorance stood plainly in front of my own face the entire time. “Fix Ya Face!” is an exhibition of faces.

“Fix Ya Face!” addresses the many ways in which Bahamian and a few international artists alike have defined the face in art. It is an exploration of imagination and process, a display of influence, thought and preservation of the ideals of beauty held by the few artists we have represented in this exhibition. Furthermore, we have used the common autocratic Bahamian colloquialism “Fix ya face!” as a way to discuss such ideals of beauty in the Bahamian context. This body of work explores the diverse methods of portraying the face and the possible reasoning behind them. For some, addressing this issue may appear as an age-old and unnecessary discussion. However, many individuals are unable to appreciate the different types of art available outside of realism and hyper-realism so it is quite necessary that such a conversation continue to take place for the sake of exposure—and the human face is an accessible object through which to examine a cross-section of artistic practices.

An artist in this exhibition who definitely moves beyond the social “norm” of realism is Mr. Kendal Hanna whose work I believe artists and viewers are most fortunate to be able to witness, particularly because of his contributions to abstract-expressionism in the Bahamian art community. Hanna’s generally loose style nonetheless makes for pieces with a strong presence and compositions that are nothing less than ‘on-point’. As one of two of Hanna’s pieces in “Fix Ya Face!”, “Mask of Girl” is a combination of ink and oil paint on a canvas which has been folded several times in a method adopted from the Rosharch test. Despite the lack of realistic detail this dark sort of silhouette portrayed here suggests that this is indeed some type of mask. Considering individuals around us have the opportunity to read into our personalities through our many expressions, it would seem only right to cover up the face at times so as to shield it from public viewing. Sometimes seeing all of the many well-designed features of a face in an art piece is not necessary, just as it seems inevitable that at some point or another one would much prefer to erase some of the wrinkles of pain and fear and simply pass through a crowd not being seen at all, just for a sense of escape.

A piece within this exhibition which so easily contrasts Kendal Hanna’s “Mask of Girl” is Matthew Wildgoose’s caricature of famed Bahamian musician Joseph Spence, suitably titled “Mr. Spence”. Wildgoose is known in the Bahamian art community as one of few artists who successfully captures the personalities of many prominent figures of this nation’s history and present-day affairs. Whether it is an illustration of Pindling posing heroically as a boxer or a play on one of many Bahamian artists, you can always expect Wildgoose to filter out the true essence of his subjects.

Unlike most of the pieces in this exhibition, “Mr. Spence” truly fits the definition of a portrait. Using acrylic paint along a tightly woven canvas, Wildgoose gives us a representative image of Joseph Spence in character: a man focused on the strings of his guitar, holding between succulent lips a supposedly unlit smoking pipe, probably armed with fresh tobacco, ready to “fire” away at the burst of musical strings. Although the artist has Mr. Spence focused on his guitar, he has not shown us the musician’s eyes—yet despite the absence of what Shakespeare might call the “windows to your soul”, spirit still exudes from this quietly playful piece, reminiscent about days gone by, love and loss, or simply an island’s cultural relics.

Fortunately enough, the D’Aguilar Art Foundation has collected from not only Bahamian artists but also artists from quite a handful of countries globally. One of the international artists represented in “Fix Ya Face!” is well-known African-American artist and scholar Romare Bearden, recognized for his many contributions concerning the representation of minority groups in the United States of America, particularly in reference to persons of African heritage.  Bearden’s “Face looking to the right” uses broad brushstrokes to create facial features that establish a person of African heritage. This is probably one of the greatest successes of this piece as Bearden’s use of semi-abstraction, basic shape and line proves that hyper-realistic detail of a person in artwork is not necessary when trying to express feeling or discuss particular topics. Based on Bearden’s definition of the face in this piece it would appear that subtlety can easily capture both the emotional and logistical aspects of a subject.

If you walk around the D’Aguilar Art Foundation you are likely to find a small, framed note written by Vincent D’Aguilar which he would have carried in his wallet from time to time. The note reads:

Douglas to Bearden “Technique in itself is not enough. It is important for the artist to develop the power to convey emotion….The artist technique, no matter how brilliant it is, should never obscure his vision.”

It is clear that Romare Bearden was confident in the advice given to him by Aaron Douglas. The focus on technical detail does not seem to be necessary when it comes to expressing certain points. As one may be able to speak to a crowd, they can address them in the most formal way possible, using words many people in the crowd have never even heard of before. Logically, this might be a very effective method however the question at the end of it all might be whether or not the speaker ever actually touched the hearts of his audience. Once you do that, once you tap into your audience’s feelings to have them see your point, then you know you have truly affected them. I have drawn this illustration simply to show that although Bearden’s “Face looking to the right” is quite a simple piece and an untrained eye might say,  “das somethin’ my chil’ could do”, the work itself can in the same time be quite complex. What seems to be a simple zig-zag line in the forehead may be a wrinkle to suggest a sense of confusion and curiosity; so does the sharp diagonal bottom lip that creates a feeling of tension. Had Bearden produced this piece in an extremely realistic manner it may not evoke the same feeling it does now. Bearden has managed to  go beyond the surface of the face itself, giving his viewer the experience of his subject’s emotions. As Bearden gives his “speech” with this subject the viewer may learn to never judge a book by its cover. Although a masterfully crafted realistic face can express great warmth and kindness, we never truly know everything that exists beyond this façade.

As these few pieces suggest,the thirty-six pieces included in “Fix Ya Face!” explores the many differences and similarities of technique and style possessed by twenty-six artists on display. I believe true style begins somewhere around an idealistic experience which is influenced by whatever one might define as a realistic experience. The ideal then exists in one’s thoughts for as short a time as two seconds to as long as twenty years. This style is then defined when these ideals become manifested in a physical form, whether in literature, visual art, performing art, and other creative ventures. Bringing together all of these “styles” of expressing the face will allow people the opportunity to see these methods and gain further understanding of how or why artwork can be created so differently. 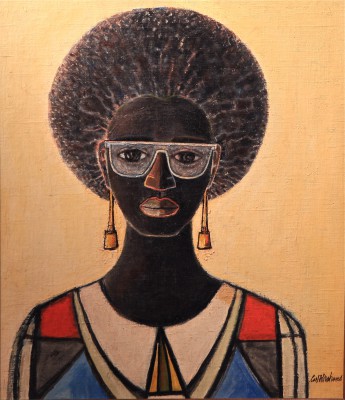 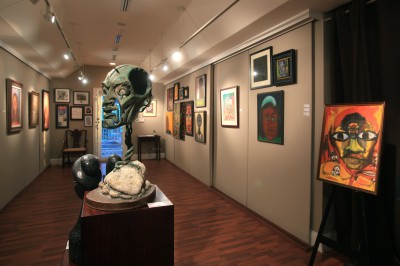 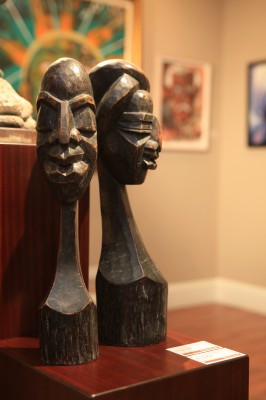 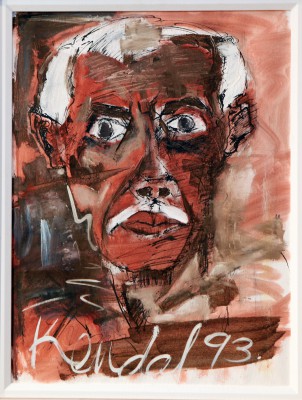