Elkino Edward Dames (b. 1983, Nassau, The Bahamas) earned his Associates of Art from The College of The Bahamas in 2008 and completed his Bachelors in Art Education in 2011. Since 2008 he has worked as an art teacher at the L.W. Young Junior High School and is presently at the Huntley Christie High School in North Andros. Additionally, he has taught at the RBC FINCO Summer Art Workshop for a number of years and began instructing at the Summer Mixed Media Workshop at the National Art Gallery of the Bahamas in 2017. Dames worked as the assistant curator at The Central Bank of The Bahamas for two years under the mentorship of Mr. Antonius Roberts.

Dames found early success as an artist when he won an anti-drug poster contest in 1994 hosted by the U.S. Customs and Bahamian Government. He ran a small art stand Downtown where he was patronized by tourists interested in his work. In 2002, he participated in his first exhibition at the Central Bank of the Bahamas and sold his first painting. Since then, he has received two honorable mentions and placed second and third in the annual event.

His first solo show, "Brush Strokes", was held on August 23rd, 2013 at the Historic Gray cliff Humidor Pavilion. He has participated in Transforming Spaces 2014 and exhibited new works at Antonius Roberts Hillside House Gallery. In 2016 and 2017, Dames displayed new works from himself and his Students in Doongalik Studios and his present posting in North Andros respectively. In March 2018, Mr. Dames again participated in Transforming Spaces "Historic Nassau" where two of his pieces were on display.

Dames' work can be found in a number of collections across the Bahamas. In 2020, Dames exhibited his works at Sixty Two Sixty, downtown Nassau. 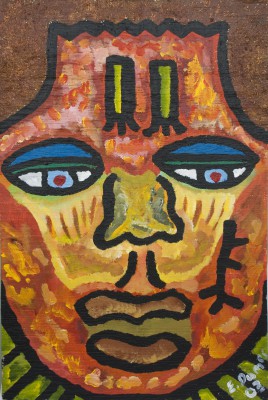