Kendal Hanna (born 1936, Nassau, The Bahamas) is one of the country’s earliest abstract expressionists.  In his early career,  Hanna worked figuratively,  but as he progressed,  his work became increasingly abstract and self-referential.  He characterizes his work as his “subconscious mind expressing itself on the canvas.”  Hanna went through a phase of painting using only black and white, but after treatment for illness, he began using color more extensively.  Today, he paints in both colour and black and white, and alternates between pure abstractionism and capturing subjects, often himself or close friends, in a more realistic style.

Hanna always dreamed of being “trained in art” and left for New York City in early adulthood to study fine art, but had to return to Nassau to look after his ailing mother and was never able to realize his dream of attending art school.  Later, Hanna studied marine biology and then worked in the post office in Nassau.  During his breaks, he visited Nassau's fabled Chelsea Pottery and soon became one of their first apprentices, along with Max Taylor and Brent Malone.  An avid reader of the art books found at the Pottery,  he learned about the work of European artists and was inspired to turn to painting. Hanna also met many visiting artists and sculptors who came to Nassau, among them Hildegard Hamilton and famous American muralist John St. John.  Hanna was influenced by their work and they encouraged him to pursue his art.

His first exhibition was held in 1992 in Nassau and then at The National Art Gallery of The Bahamas,  a restored colonial mansion formerly known as the Villa Doyle.  Hanna remembers accompanying his mother to work and looking at the Villa Doyle opposite. “I would never realize that my paintings would be shown in this place, you know it's sort of unbelievable,” he says about seeing his work hanging in the Gallery now.  Hanna had exhibitions at the new Providence Art and Antiques Gallery in 2005 and 2006, the second exhibit showing many of his self-portraits.  He moved into Popup Galleries in 2007 where he is still the artist in residence. In 2011, a major retrospective of his life's work was shown at the NAGB.   In 2015, Hanna was selected to exhibit at Volta Art Fair in NYC.  A documentary, Brigidy Bram, tells the story of Hanna's life and working processes. 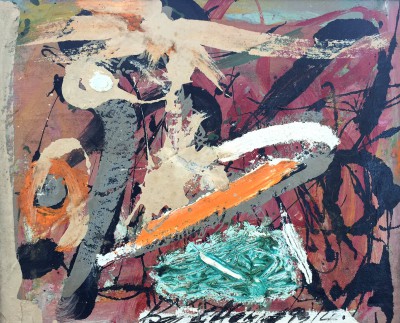