Between Earth and Heaven

The vivid imagery from Alfred, Lord Tennyson’s epic poem, “Ulysses”, provides inspiration for Between Earth and Heaven, a new exhibit now open at the D’Aguilar Art Foundation, featuring 28 works from our permanent collection.

We are all thoroughly fed up… weary of waiting for our lives to continue after an abrupt halt in March 2020. We put so much on hold: Our social celebrations, our travels, setting new goals, achieving longstanding aspirations.

But the elderly, many of whom have suffered from drastic sequestration, might have suffered the most from the pandemic. While they are often hidden out of sight -- and therefore out of mind – the little time they have left on their personal time lines continues to dwindle.

They have lived full and productive lives; they have raised their families; they have contributed to their communities. And they had also consciously set aside this precious and often limited time to fulfill lifetime goals – goals that could not be previously pursued due to the commitments and time constraints of their younger years.

Instead of taking that longed for voyage, of connecting with old friends and colleagues from years ago, of returning to memorable destinations of their youth, they are faced with the rigid boundaries imposed by Covid.

Their dramatic predicament is not unlike the frustration expressed by Ulysses in Alfred, Lord Tennyson’s poem, where the protagonist reflects the wretchedness of his weakened constitution, “ We are not now that strength which in old days moved earth and heaven” Though the accomplishments of his heroic youth give him some inspiration, he cannot be sustained on memories alone, crying out that “Some work of noble note, may yet be done, not unbecoming men that strove with Gods".

Ulysses shares vivid images to describe the remote places and settings he still longs to visit: “cities of men and manners”, twinkling rocks, a slow moon climbing over a beloved scene, vowing that it’s “not too late to seek a newer world” and “sail beyond the sunset … and all the western stars, until I die”

The exhibition includes artwork from the following artists: 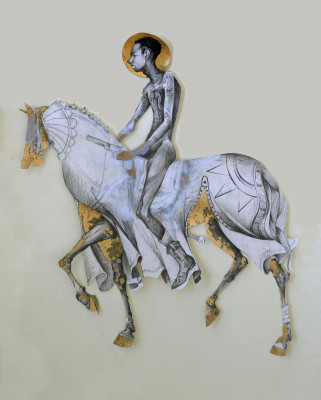