In 1973, Smith took up an art teaching position in The Bahamas. Once in Nassau, he started a series of small pencil drawings with incongruous juxtapositions that he later developed into larger paintings. His ‘Pop-Realist’ style contrasted imported artefacts, such as American cars from the 1950s and 60s, with ethnic and often idealised Bahamian landscapes. He worked with themes such as security screens erected around the island, postcards and African and devotional artefacts. Smith explains, “The focus of my work revolves around themes which are essentially perennial. Our problematic interaction with social issues like crime, religion and consumerism remain with us – as does the sometime incongruous reality of our idyllic, post card shoreline.”

Smith held his first solo exhibition of this work in Nassau in 1981, and in 1984 had his first USA solo exhibition in Miami, Florida. Six subsequent shows followed in Nassau, culminating with a ten-year survey of his work at the College of The Bahamas in 1990.

In 1991, he left The Bahamas for California, initially painting billboards for the recording industry before gravitating to Hollywood scenery shops. He eventually became a journeyman scenic artist in Local 816 (Scenic Artists Union), working for many years at NBC TV Studios in Burbank, California.

Smith's work has been shown in many solo and group exhibitions. In 2008, a concise retrospective of 15 signature paintings from the 1970's and 1980's was held at the National Art Gallery of The Bahamas (Dave Smith - Twist of Fate). In 2011, Popopstudios organised Marquees, an exhibition of Smith's large format photographs of Nassau movie theatre marquees, and simultaneously, the Central Bank hosted Nassau Revisited, a series of new paintings. He has also shown at numerous galleries in Los Angeles and in 2022-2023, he was included in a curated exhibition of artists from the Caribbean and it's diasporas, (Tropical is Political: Caribbean Art under the Visitor Economy Regime) shown at the Americas Society Gallery in New York and the Museum of Contemporary Art of Puerto Rico in San Juan. 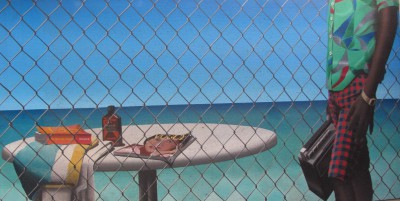