Allan Pachino Wallace (born 1979, Nassau, Bahamas) is a visual artist who specializes in murals and live-paintings. Wallace studied at The College of The Bahamas under the tutelage of Antonius Roberts and excelled at life-drawing, finding his niche in portrait painting. Wallace has developed a knack for creating intricate scenes including portraits and nudes from memory.

After working on various commissions, he sought to challenge himself by working on a larger scale. Wallace became focused on creating open air murals, which now brighten the Nassau landscape in unexpected locations. He painted a series of murals for The National Art Gallery of The Bahamas’s Livable Neighborhoods Project, transforming graffitied walks into beautiful images. He participated in the Love My Bahamas mural project where downtown buildings were transformed into vibrant works of art. For Transforming Spaces, he has created massive murals that tie into themed exhibitions at the D'Aguilar Art Foundation, including Disrobed in 2013 and Haitainary in 2015. Also in 2015, Allan completed a monumental painting depicting Bahamian history, adorning over 78 feet of wall space inside the Nassau restaurant, Lukka Kairi.

Wallace's other passion is painting performances, where he creates large works in front of a live audience. He demonstrated his skill of this process to large audiences during the Pandora's Box event at Atlantis, and also led the artistic team which painted a large mural during the Baha Mar Topping Off Ceremony.

Wallace has won the Central Bank Art Competition twice during the course of his career. 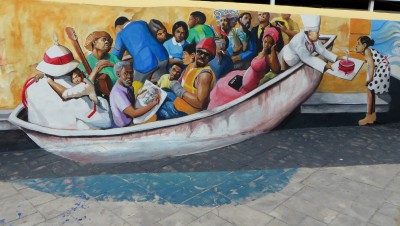