Roberts began his Art career as a painter and his practice has grown to incorporate sculpture and installation.

Among many of his notable works is Sacred Spaces, which pays homage to the first landing site of slaves in The Bahamas.  Roberts carved 12 female figures from the rooted stumps of Casuarina trees, all of them looking towards Africa. In 2009, he designed seven acres of grounds at Centreville House, which included landscaping and Art installations. It marked the first downtown park in Nassau. In 2013, he was invited to create an installation of hand blown glass spheres for the new Lynden Pindling Airport.

A graduate from Philadelphia College of Art (now the University of the Arts, Philadelphia, P.A.), Roberts received a Bachelor’s of Fine Art in Painting in 1981 and has since played a  significant role in the development of art and artists in the country. He was a teacher at Government High School and Lecturer at College of The Bahamas, mentoring a generation of Bahamian artists.  For the past 25 years, he has been a driving force behind the Central Bank's annual art competition.  He was a coordinator of the FINCO Summer Art Workshop for youth, and played a leading role in the creation of the National Art Gallery of The Bahamas.  Roberts is also deeply committed to community development and is the current Artist-in-Residence of the Schooner Bay project in Abaco.

Roberts was the recipient of a Cacique Award, a Bahamas Silver Jubilee Award, and a Delta Sigma Theta Award.  In 2008, he was featured in the documentary film Artists of The Bahamas. 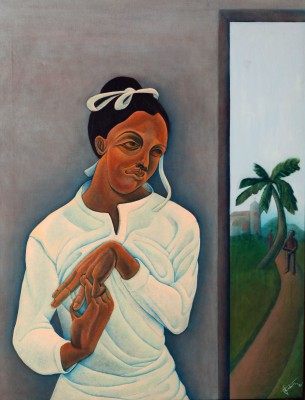