Artists of The Bahamas

Based on the movie ‘Artists of the Bahamas’ produced, directed and photographed by Karen Arthur and Thomas Neuwirth which premiered at the 2008 BIFF Film Festival, the artwork of the eleven Bahamian artists featured in the film will be showcased at six galleries in the City.  The artists include the late Amos Ferguson and Brent Malone, Kendal Hanna, Max Taylor, Dave Smith, Eddie Minis, Stan Burnside, Jackson Burnside, Antonius Roberts, John Beadle and John Cox. Participating Galleries located from the western end of the island to the east include Post House featuring Taylor and Roberts, Popop Gallery featuring Cox and Hanna, D’Aguilar Art Foundation featuring Malone and Minnis, National Art Gallery of The Bahamas featuring Ferguson, The Hub featuring Dave Smith and Doongalik Studios featuring Burnside, Beadle and Burnside.

Recommended by the country’s foremost art collector, the late Vincent D’Aguilar, the filmmakers travelled to Nassau from 2006-2008 to research, interview and film the artists and their work. Karen Arthur commented, "This wasn't Paris or London or New York, we were astounded by the skill, diversity & eloquence of these extraordinary Bahamian artists, and felt honored to preserve them & their art on film."
In order to celebrate this rich artistic heritage a group of collectors, Saskia D’Aguilar, Dawn Davies and Pam Burnside decided to plan an art show based on the film, which would allow the Bahamian and visiting public the opportunity to share in the viewing of this magnificent array of artwork.

“The Bahamas has an enormously rich artistic heritage and it is important that collectors preserve these treasures for future generations. This film was a major undertaking and we also commend the filmmakers for their foresight in preserving this important part of the country’s fine art history.” 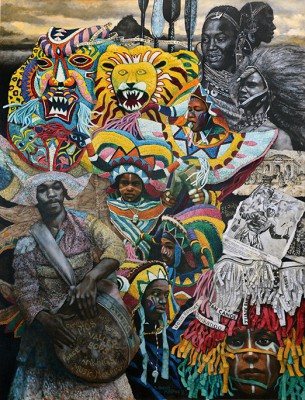