Eddie Minnis (born 1947, Nassau, The Bahamas) remembers his mother encouraging him to go outside and paint from a very early age.  He received his high school education from St. John’s College in Nassau, where he held his first exhibitions during student tea parties.  He is an alumnus of Nassau’s famed Chelsea Pottery, along with other well known Bahamian artists of his generation.

He received a BS in architecture from McGill University, Canada in 1971, where he also started cartooning and sending submissions to the local newspaper.   Despite his academic credentials in architecture, Minnis pursued his passion for painting and decided to focus on a career in art after graduation.  But Minnis’ grounding in architecture has always remained with him, as he most is renowned for his detailed paintings of The Bahamas’ charming historical buildings set in lush tropical landscapes.

Since 1965, Minnis has specialized in oil painting with the palette knife,  a technique that creates a heavily textured finish on the canvas, similar to the style of French Impressionists.  As a cartoonist, Minnis serialized his Pot Luck cartoon in The Tribune for many years, building an archive of over 3,000 cartoons in The Tribune and Nassau Guardian during a 10 year period.

Another of Minnis’ creative outlets is music, and he has enjoyed considerable success composing songs about island life.  He has cut 10 albums since 1971, including Bahamian classics such as Naughty Johnny.

Minnis held one-man shows in 1969, 1972, 1976 and 1986 and participated in numerous group shows both locally and abroad.  His three children are also artists and Minnis encourages young talent wherever he finds it.   In 2014, The National Art Gallery of the Bahamas (NAGB) organized a comprehensive retrospective off his work, together with his children, in an important exhibition entitled “Creative Grace”.
Minnis's paintings are in private collections internationally including in the U.S.A., Canada, Britain, Australia and Korea. 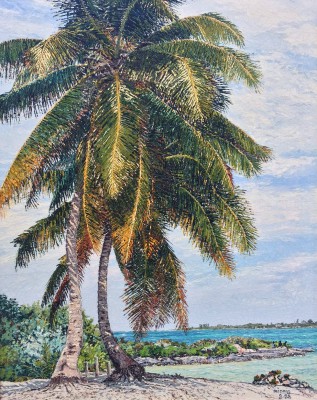