John Beadle, the son of a Jamaican-man and a Bahamian-woman (born 1964, Nassau, The Bahamas) works in a variety of mediums and building methods with ease. It is this incredible proficiency that allows him to describe universal narratives such as burden and freedom through notably meticulous and beautiful presentation.

Beadle grew up in Nassau, in a family where art was always present and valued and he took an early liking to drawing. In high school, under the guidance of Sandra Illingworth, he came to enjoy art as a personal experience through the creative process rather than as a competition. This particular revelation has informed his work ever since, further molded by the mentorship of Stan Burnside while studying art at the College of the Bahamas, then at the Rhode Island School of Design while he earned his BFA in Painting and through to the Tyler School of Art, Temple University, where he earned his MFA in Painting, as well as through studies in Rome, Italy.

During that time, Beadle was an important member of several artist-formed groups. He exhibited with the collection of The College of The Bahamas artists OPUS-5 (with Clive Start, David Ernst, Sabrina Glinton, Jolyon Smith and D’Agino Burns) in the 1980's. In the late 1980s and early 1990's, he joined Jackson and Stan Burnside, Antonius Roberts, Brent Malone and Maxwell Taylor to form Bahamian Creative Artists United in Serious Expression (B-CAUSE), a group of internationally-educated artists hoping to challenge themselves and the mainstream view of art through their work. Members of this group collaborated on large Action paintings in the Jammin series, though eventually only Beadle and the Burnside brothers continued the practice as B.B.B. (Burnside Beadle Burnside), producing large collaborative works as kindred spirits.

In the early 1990's, Beadle took a welcome break from painting for seven years while he acted as Art Director of Doongalik Studios and focused on building Junkanoo pieces as a principle designer and sculptor in the One Family Shack, forming an even closer bond with Jackson and Stan Burnside.

In early 2000, the artist walked off-beaten paths in New Providence and the Family Islands as a study of natural environments in order to learn more about bush medicine—however the exercise rekindled his interest in painting. In the resulting work, people and landscape dissolve into one, illustrating the new perspective of “everything is everything”.

Beadle’s work has been featured in the 2008 documentary Artists of The Bahamas, and in 2012 was also featured in the major travelling exhibition Master Artists of The Bahamas. In 1991 he was named Emerging Artist of Latin America and the Caribbean in Nagoya, Japan. Beadle took part in the Big River 3 International Artists’ Workshop, Aripo, Trinidad, 2006 and the 5th Insaka International Artists Workshop, Livingston, Zambia, 2010. In 2013, The National Art Gallery of The Bahamas showcased The John Beadle Project, a major exhibition featuring recent paintings, sculptures and multi-media pieces. He exhibited in The Biennale Internationale D’Art Contemporain Martinique, Martinique, 2014 and in 2015, EN MAS’: Carnival and Performing Art of the Caribbean, New Orleans. This exhibition is on tour; installed in the National Gallery of the Cayman Island and the National art Gallery of The Bahamas in 2016. In 2017 through 18, En Mas traveled to the Dustable Museum of African American History, the Museum of African Diaspora in San Fransisco, and the Ulrick Museum in Kansas. His work was also featured in Oversesas: Cuba and The Bahamas in Germany in 2017. In 2018, Beadle was featured in a collaborative exhibition with the British Council, We Suffer to Remain, that opened at the National Art Gallery of the Bahamas. 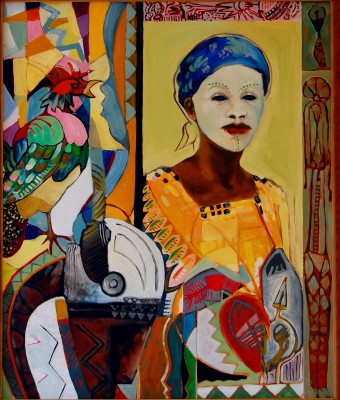 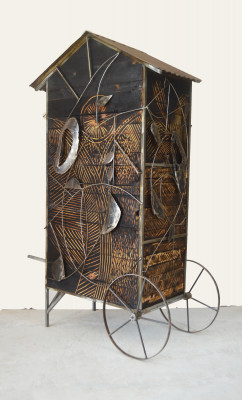 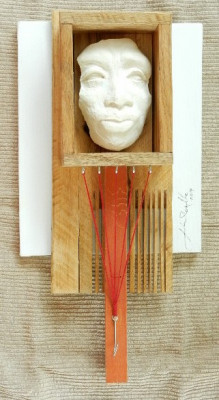