This is Yours, That is Mine

The D'Aguilar Art Foundation is pleased to present 'This is Yours, That is Mine',  a presentation of new works by Jeffrey Meris and Tessa Whitehead.  Both artists examine fragments of the landscape as a record of the ruins of history and a demonstration of desire, power and surrender. Meris exhibits drawings and sculptures that examine the literal and physical street as a binding space for black culture and a stage for trauma. Whitehead's paintings  and objects of unkept landscapes are an inquiry into failure and surrender.

July 5th 2016, body is traumatized, irresponsive. Blackness plunges into a coma.  This body of work serves as a grounds for dialogue, engagement and repositioning of trauma executed against blackness. Watching Alton Sterling’s and Philando Castile’s bodies desperately fall from grace and to the tarmac- both made available for public consumption- left me questioning the fragility and dispensability of not just black bodies but black people. The mundane suddenly holds political significance when one thinks of what it means to be street, of the street or from the streets that were not really designed for or by us. The work oscillates between celebration, contemplation, mourning and rebirth.
July 8th 2016, The Bahamas issues travel warning “advising all Bahamians traveling to the US but especially to the affected cities to exercise appropriate caution generally. In particular young males are asked to exercise extreme caution in affected cities in their interactions with the police. Do not be confrontational and cooperate.”

Jeffrey Meris is a Nassau based artist born in 1991. Meris received an Associates of Art in Arts and Crafts from the College of The Bahamas and a B.F.A in Sculpture from Tyler School of Art, Temple University in May 2015. Meris is the recipient of 2010 Popopstudios Junior Residency Award, 2012 Harry C Moore Lyford Cay Foundation Art Scholarship and Temple University 2012 Scholar Award, winner of 2013 Central Bank of The Bahamas Art Competition and Guttenberg Arts Artist in Residence 2016. Meris has shown locally and internationally in New York, New Jersey, Philadelphia, Vienna and Haiti. Jeffrey Meris is the black power ranger.

Tessa Whitehead’s explorations of landscape and objects explore the connection between journey, landscape, love and loss. She objectifies symbols, and symbolizes objects – a bed, a rainbow, a house, a kiss – which while anonymous are also universal, and play with the tension between the disrupted forms and the strong emotional and physical connotations we attach to them. The works draw from the act of looking at the landscape as a way to describe the introspective self: as lovers, as conquerors, as adventurers, as passive observers or active viewers. And how this varies depending on your point of view and movement or whether the geography is familiar or unfamiliar. 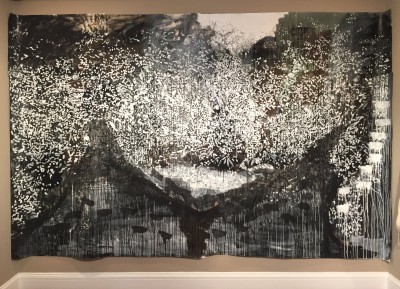