“Brigidy Bram”, a short film about Bahamian artist Kendal Hanna, will be screened next week at the National Art Gallery of The Bahamas in hopes of raising funds and interest for the production of an expanded feature-length documentary that celebrates the life and work of the country’s first abstract expressionist.

“Brigidy bram” is a figure of speech that Hanna has coined in his unique vernacular, a tribute to the interconnection of seemingly unrelated events.

Through the lens of Hanna’s memories, the feature documentary explores his traumatic younger years when, during his 20s, he was diagnosed with schizophrenia and prescribed an experimental treatment of intensive electric shock therapy (later found to be ineffective at treating the disorder).

After Hanna’s release from the institution two years later, he returned to painting in order to recover his motor capabilities and mental acuity. Now 76, Hanna is one of the country’s most celebrated and prolific artists, releasing work deemed “carefully considered and contemplated, provocative and masterful,” says artist Dionne Benjamin-Smith.

Born June 25, 1936 in Nassau, Kendal Hanna is a painter and a sculptor and recognized as one of The Bahamas’ first abstract expressionists.

Hanna’s work might have gone unnoticed to this day had it not been for the discerning eye and efforts of the late Vincent D’Aguilar, who became Kendal’s first and foremost collector. Subsequently, art and antiques dealer Jay Koment and former NAGB Director Erica James discovered what Koment characterizes as “a gold mine” of paintings in Kendal’s apartment a little over a decade ago. Now Hanna’s pieces are collected everywhere, from Hawaii to Hong Kong, and his work is revered in the Bahamian art community.

Yet, Kendal Hanna has only seen a taste of the worldwide recognition his legendary life and work merit, according to Bahamian artist Toby Lunn and U.S. filmmaker Laura Gamse. The two are now co-directing the feature documentary “Brigidy Bram: The Kendal Hanna Story” which explores the inner thought processes and the creative progression of this master artist. Lunn and Gamse will be screening the short version of the film at the NAGB on Thursday, June 20, 7:30 p.m. in the hopes of finding donors and producers interested in financially and creatively supporting the making of the feature film.

The short version of “Brigidy Bram”, which features the work of abstract video artists from around the world depicting episodes from Hanna’s extraordinary life, was awarded the Bahamian Oscar during the February 2013 ceremony, held by the Bahamas International Film Festival.

“Shorts rarely get airtime,” said Gamse. “If we stopped now very few people outside The Bahamas would learn about Kendal Hanna. We’ll be taking the feature documentary to film festivals and theaters around the world and introducing art collectors and appreciators of art to a giant talent they might otherwise have missed.”

Lunn and Gamse write in their feature film treatment, “A uniquely talented artist nearing the end of a long and prolific career, Hanna deserves the international recognition due an artist of his extraordinary skill.”

Prime Minister Perry Christie recently met with Hanna, Lunn and Gamse to discuss the worldwide release of the feature film.

The D’Aguilar Art Foundation and several private donors, in conjunction with


Prime Minister Christie, are already supporting the development of the film. Prime Minister Christie expressed his admiration for “the brilliant Kendal Hanna” and had urged Bahamas International Film Festival-goers to see “Brigidy Bram” at the premiere of the short film this past December.

Recalling investing $50,000 in Bahamian artist Amos Ferguson’s work when Christie served as minister of tourism in the early 1980s, he remarked on the ability of the Bahamian government to jumpstart artistic careers and movements through relatively small investments.

Amos Ferguson’s work has since attracted millions of dollars of art tourism to the island, and Christie is now committed to helping local artists increase worldwide awareness of The Bahamas as a destination for arts and culture, in addition to the sun and sea tourists know so well.

“Kendal Hanna’s work is of global caliber. He deserves to be a household name in art communities around the world, and The Bahamas deserves to be recognized for fostering his genius,” says Lunn. “Mr. Christie recognizes that, and we look forward to making it happen with Brigidy Bram 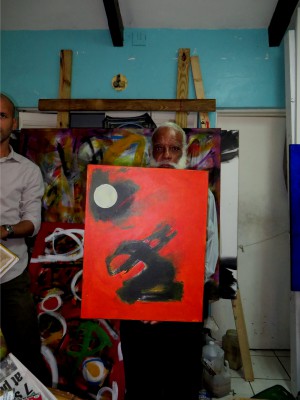 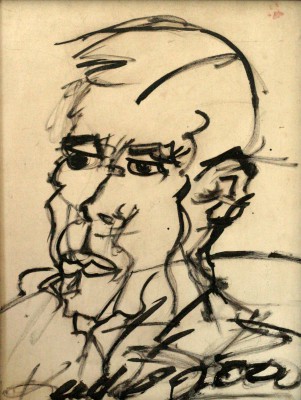