Alistair Stevenson is about to depart to China to further his studies in ceramics; however before departing Stevenson has created a series of ceramic pieces that reflect his personal and professional development over the past six years. Within the series, he depicts his growth, not only as an artist but also as an  individual. He identifies that his largest area of growth has been his diligence and dedication, two areas that are not physical but are strongly manifested in the physical. This dedication is what has made The Growth Series and Stevenson’s future ventures possible.

There is an ever-present theme through Stevenson’s approach, his inspiration, his materials, and the final product. Growing up on Long Island and being constantly surrounded by nature, there is no wonder that within the pieces is it evident that nature has had a tremendous influence on Stevenson. He stated that he believes that in nature there is constant growth and regrowth, destruction, cycle, and movement. Each aspect of nature that Stevenson is drawn to have all been exposed within “The Growth Series”. The use of natural materials such as wood and coral perfectly illustrate the different stages of development in nature. Prior to it being fired, clay can be modeled, remodeled, dried, soaked, yet still remain malleable. So as an artist, Stevenson acknowledges the correlation between himself, his work, and nature’s continuous growth and regrowth and remains malleable to allow the growth and change to occur. Although this series, being called “The Growth Series” reflects his developments so far, Stevenson welcomes further development through the knowledge he will receive in China.      He draws from the idea of movement to add life to his work, which is so prominent in the finished products as each piece draws the eye from rigid, geometric shapes to organic, fluid shapes. This morph is prominent in the piece Lunar Landscape, and emphasized as the changing surfaces manipulate the glaze’s pathway.

Seeing each piece change its aesthetic from rigid to relaxed, another aspect of growth is present: adaptability. Being able to adapt is key to Stevenson as an artist, in particular when working with natural materials and leaving them in their organic states. As Alistair’s life moves to China, he will have to adapt and harmonize with a completely new culture, and seeing as China has such a rich history in ceramics, there is nothing but excitement and readiness in Stevenson’s voice at the thought of this move. 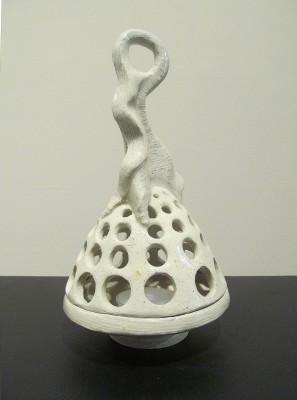