Alistair Stevenson (born 1990, Long Island, Bahamas) is a ceramicist whose work is influenced by nature.  In complex hand-built pieces that mimic the organic forms found in our surroundings, Stevenson confronts his viewers with the paradoxical beauty and tyranny of their landscape. The very act of their creation—through a balance of careful manipulation and spontaneous outcomes—mimic the larger power struggles between man and nature.

Ever since his father’s kindly instruction over coloring books, Stevenson has enjoyed an affinity for the visual arts. Mentored by his high school art teacher Julie Knowles at the N.G.M. Major High School on Long Island, Alistair left his home island after graduation in 2007 to pursue a Bachelor Degree in Art Education at the College of The Bahamas in Nassau, New Providence.

Though his devoted studies to the ceramic arts, he received the first ever Dennis Knight Scholarship Award in 2009 from Jessica’s Tileworks , allowing him to pursue further studies at the College of The Bahamas,  In 2011, he received the Popopstudios Junior Residency Award, giving him a dedicated studio space in a creative community for a entire summer.  During this period, he independently advanced his own creative studies, culminating in his first major art exhibition, Habitat, with fellow Junior Resident Keva Fawkes.

Though he excelled in his art education degree, Stevenson eventually realized that his passion truly lay in the visual arts, prompting him to switch majors and graduate in 2012 with an Associate Degree in Art from the College of The Bahamas.

While working as a curator post-graduation at The D’Aguilar Art Foundation, he continued to expand his artistic practice using a donated kiln that he kept at the Foundation’s gallery space in a makeshift art studio.

His work has been featured in Deception, Popopstudios ICVA, 2011; Transforming Spaces Fibre tour, Pink-Un Gallery, 2012.  He has also shown work in a traveling exhibition based in Australia, The Matchbox Show.

In the summer of 2012, with the support of various art patrons throughout the Bahamas, Stevenson completed a ceramics course in China with a group of students from the University of West Virginia.  This six-week course allowed Alistair to study the ceramic arts, including a three-week studio portion in JingDeZhen City, Jiangxi, the porcelain capital of the world.

The visit inspired Alistair to find a way to return to the China to take up formal studies of ceramics. In 2013, after a solo show at the D’Aguilar Art Foundation, The Growth Series, he raised the funds required to commence his studies at Jingdezhen Ceramic Institute in China, where he continues with his degree program. 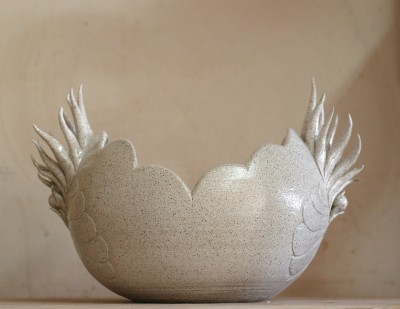