Averia Wright (born 1987, Nassau, Bahamas) is an interdisciplinary artist known for her sculpture and ceramic artworks. Wright graduated from Ohio University in Athens, Ohio with a Masters of Fine Art in Sculpture and Expanded practice, May 2018 and BFA with concentration in Ceramics from the University of Tampa, Florida, May 2009.

Upon graduating from UT in 2009, Wright worked at Doongalik Studios Art Gallery as a curatorial assistant under the expert guidance of cultural activist Pamela Burnside and the late artist/architect Jackson Burnside. In 2011, Wright moved to The National Art Gallery of the Bahamas (NAGB) on the curatorial team and left in 2015 in the position of assistant curator and registrar to pursue her masters.

Inspired by folklore and Bahamian history, Wright's previous sculptures draw from tribal imagery and organic forms. Familiar forms resemble local flora and fauna, deep sea creatures and dancing bodies, but they do not fully reveal themselves; always becoming, but never being. Wright’s current practice delves into a criticism of the geopolitical nature of the Bahamas and other countries in the region using her upbringing through the straw market industry.

Wright co-curated alongside Ashley Knowles, the Bahamian Domestic in the Permanent Exhibition of the NAGB. More recently she co-curated the From Columbus to Junkanoo exhibition with Jodi Minnis for the Bahamian delegation that traveled to Santiago de Cuba for the Fiesta del Fuego 2015. The exhibition was then shown at the NAGB in the Permanent Collection and is now a published catalogue From Columbus to Junkanoo: An overview of Bahamian History through Art.

In 2015, she was awarded the Harry C. Moore Scholarship for the Arts from the Lyford Cay Foundation. She also received an Ohio University Recruitment Award where she worked as a graduate gallery assistant, teachers assistant and instructor. 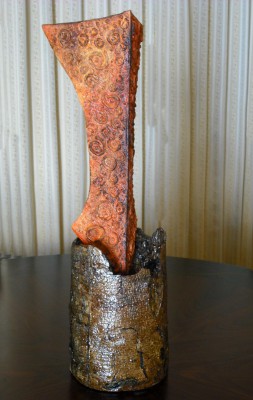