Tavares Strachan (born 1979, Nassau, Bahamas) lives and works in New York City. He received a BFA from the Rhode Island School of Design in 2003 and an MFA from Yale University in 2006.

Crossing all media, Strachan transforms ordinary material into meditations on existence and physical and psychological geography. His work highlights the migratory nature of artistic production. Strachan is perhaps best known internationally for his 2006 work titled 'The Distance Between What We Have and What We Want', consisting of a 4.5 ton block of ice harvested in a river near Mount McKinley, Alaska and FedExed to The Bahamas, where is was placed in a solar-powered transparent refrigerated case in Nassau.

In 2012, a 20,000 square foot overview of Strachan's work from 2003-2011 subtitled Seen/Unseen, was presented at an undisclosed New York City location and was closed to the public. Curated by Crutchfield and Hobbs, the exhibition is fully documented with an illustrated catalogue.

In 2013, the same curators took his work to the 55th Venice Biennale to represent The Bahamas. In 2014, Strachan participated in Prospect 3, New Orleans, with a 100 foot neon sign that travels down the Mississippi River, to be docked at various points, that simply states 'You Belong Here'. 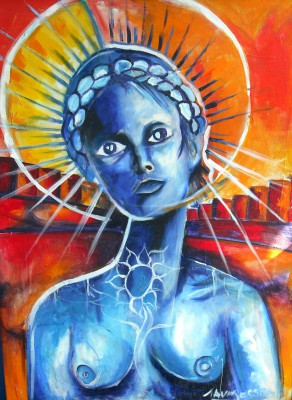