As a student at R.M. Bailey School, Taino Bullard (born 1978, Nassau, The Bahamas) would spend his summer at FinCo’s Art Workshops under the tutelage of Antonius Roberts, Max Taylor, John Cox and Toby Lunn.  In 1996, the Jackson Burnside hired Bullard to work alongside him and John Beadle at Doongalik Studios Art Gallery, an opportunity that had a lasting impression on the artist and the first experience he had working in a studio.

While attending the College of the Bahamas, Bullard had the opportunity to work at John Cox’s Popopstudios International Center for the Visual Arts, which inspired him to participate in his first exhibition, Common, in 2003.

Bullard co-founded The NewSkool Artists along with his wife, Davinia Whitlock-Bullard, Tamara Russell and Tripoli Burrows in 2004.  This group of artists had a number of successful exhibitions that featured exciting contemporary artworks created from a variety of traditional and non- traditional mediums, including paintings on multiple levels of masonite and works on dimensional aluminum surfaces.

Bullard’s  skills are wide-ranging: he is a good draughtsman; he draws and paints photographic portraits and paints murals, but he excels in his mixed media assemblages and paintings. His work is bold, colorful and celebratory.  Most Recently, his portfolio has expanded to aluminum sculptural pieces and even jewelry making: he and his wife are currently establishing a line of artistic hand-crafted jewelry called Ann Chichi. 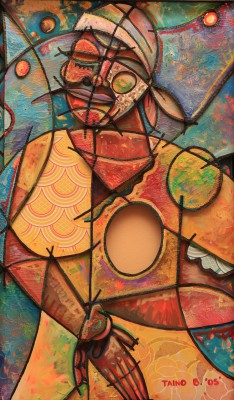