Ceramicist Tamara (Russell) Harrison (born 1977, Nassau, Bahamas) was influenced early on by noted Bahamian artist Eddie Minnis, who encouraged her to develop her love of art and focus on the beauty of nature and creation. Her elegant pieces draw inspiration from organic, natural and skeletal forms.

Russell attended Queen’s College Primary School and graduated from St. Anne’s High School. She participated in the annual FINCO Summer Art Workshop, where she met other noted Bahamian artists, such as Maxwell Taylor who helped her develop her skills in drawing; and Antonius Roberts, who encouraged her to invest more of herself in her artistic expressions and to explore abstract art.

It was at the FINCO art workshop that she had her first brush with ceramics. Later, as a scholarship student at the College of The Bahamas (COB) she discovered a love for clay, under the tutelage of ceramicists Jessica Maycock-Colebrooke and Joann Behagg.

Russell received an Associates’ Degree in Art from COB and participated in numerous exhibitions between 2002 and 2011. In 2003 she was awarded first place in the Central Bank Art Competition for a three-dimensional piece entitled Two Born. In 2004 she exhibited with the New Skool Artists in the show Dis We – Familiar Words from Contemporary Lips, which focused on Bahamian culture and was held at the Central Bank Art Gallery. The following year, in 2005, she participated in a second New Skool show, Beneath the Surface, featuring works designed to put the artists and their life experiences on display.

In 2007, Russell started using wood and metal in her three-dimensional work. By 2009, she began creating larger scale pieces, seen in the All Ceramics exhibition at Popopstudios ICVA.  In 2010, she was a guest artist in The Minnis Family Art Exhibition held at UBS (Bahamas) Ltd.

Before relocating to New York, Russell held a one-woman show featuring works created throughout her career. 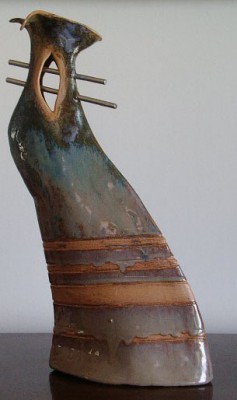