Roddie Pinder (born 1940 Spanish Wells, Eleuthera, The Bahamas) is well known as the premiere wood turner in The Bahamas.  Pinder came to his art practice later in life; before finding his craft he was an Out Island Commissioner, serving in the Ministry of Health and working as a school teacher.

His love for woodworking lay dormant until he became friends with Edwin Ferguson from Nassau, who was well known for making wooden spinning tops.  After the death of another family friend, James Lowe, the family gave Pinder his lathe. He studied briefly with world-renowned wood turner Rude Ofolnik and has never looked back.

Presently working out of his basement workshop on Russell Island, Spanish Wells, Pinder uses native woods like Madeira, Horseflesh, Tamarind and Cork to create delicate vases and vessels.   Often, he highlights the natural irregularities found in these native species, by designing his vessels to include bark, complex veining, and odd growths.

In 1991 he was commissioned by the Bahamas Chamber of Commerce to make an urn of native hardwood for each landfall of Christopher Columbus.  In 1992 he turned the Urn of Guanahani that was filled with sand from the beach of San Salvador. The urn now rests in the tomb of Columbus in Santo Domingo.

In 2011, Pinder was the recipient of the E. Clement Bethel Award for Excellence in the Visual Arts from The College of The Bahamas.  His artistic turnings have made their way into homes and collections worldwide. 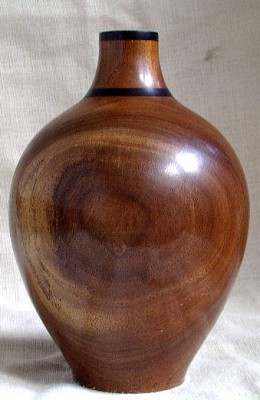