Toby Lunn's (born 1972, Nassau, The Bahamas) gestural abstraction paintings are created with layers of brushwork and drip-painting, glazes and paint.  Drawing from themes of balance, spirituality, the subconscious, harmony and chaos, Lunn describes his paintings as "a state of being".

With little exposure to art in high school and a family in the field of medicine, Lunn was initially persuaded to pursue physics as a profession. However, at the College of The Bahamas, he met Art Professor Stan Burnside who encouraged him to develop his creativity and subsequently became Lunn's mentor.

After obtaining his Associate’s in Art from the College of The Bahamas in 1991, Lunn held his first solo exhibition at the Central Bank of The Bahamas, and soon thereafter in 1992, participated in a joint exhibition with his lifelong friend, fellow visual artist John Cox, at the Bahamian Art Gallery in Nassau.

Lunn pursued a Bachelor’s of Fine Art at the Maryland Institute College of Art, graduating in 1994.  While Lunn enjoyed painting the figure, he grew tired of the politics associated with figure painting, and in particular the conversations about race in connection to his own elusive mixed-race identity.  A professor introduced him to abstract expressionism and this inspired a huge shift in his practice.
In 2012, Lunn and Cox paid tribute to their artistic friendship and individual development since their 1992 show with the exhibition 20/20 at Popopstudios ICVA.  The same year, Lunn opened The Red Gallery, a small, casual and comfortable exhibition space out of his home,  which gives him control over the presentation of his work and serves as a welcoming space where he can hold conversations about artwork with fellow artists and collectors.

Lunn credits his mentors, Stan Burnside, Jackson Burnside, Brent Malone and Kendal Hanna for shaping his philosophy about staying true to one’s self in artistic practice.  In 2011, Lunn began a filmmaking project with a visiting artist Laura Gamse, featuring beloved abstract expressionist  artist Kendal Hanna.  The resulting short film, Brigidy Bram,  gained an honorable mention at its 2012 premiere during the Bahamas International Film Festival.  In 2014, Lunn and Gamse continued to expand the documentary into a feature length film.

Lunn lives and works in Nassau, The Bahamas. 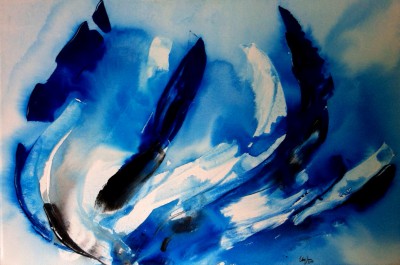