Ricardo “Cardo” Knowles (born 1962, San Salvador, The Bahamas) is an impressionist painter whose pieces invite nostalgic reflections on island life in the context of modern times. Approaching quaint island scenery with a European sensibility and training, Knowles finds joy in “reaching the soul through nature”, capturing the spirit of the Bahamian landscape for future generations.

Born on San Salvador and growing up in Nassau, Knowles’s artistic skill often afforded him design opportunities at his secondary school, C.C. Sweeting, and also caught the eye of his neighbors, who asked the fourteen-year-old to paint their home.

Yet it was not until Knowles met local artist Homer Williams that his talent flourished through Saturday morning art lessons. Soon enough, he took on commissions and gained enough confidence to set out on his own, taking to the streets of Nassau to capture the scenery on his canvas ‘en plein air’.

Soon thereafter, the artist held his first exhibition in 1980 with printmaker Max Taylor who he met through a FINCO art workshop. The exhibition cemented Knowles’s desire to pursue art as a career.  With the proceeds of sales from his show, he explored his options to study art abroad.  With advice from his mentor Stan Burnside, Knowles chose and attended the Pennsylvania Academy of Fine Art, graduating in 1985 with a Fine Arts Degree.

During his last year at the Academy, his paintings were hung and sold in the Academy museum where he won many prestigious awards.  He also continued to enter and earn top awards at art competitions back home, including those by the Central Bank of The Bahamas and the Commonwealth Fair Art Show. Returning home to The Bahamas after his studies, Knowles held exhibitions at Spectrum Fine Art Gallery and Lyford Cay Gallery.  In 1996 he embarked on a decade-long independent art study in Europe, expanding his  creative practice in the south of France and at the Royal Society of Art in London, the U.K., which proved to be monumental in cementing his recognizable style influenced by great European impressionist masters.

Knowles’s work has been displayed in such one-man exhibitions in The Bahamas as Portrait of the Bahamas, 2005 and Promenade, 2006 and can be found in various private collections, as well as in the collections of FINCO and the Central Bank of The Bahamas. 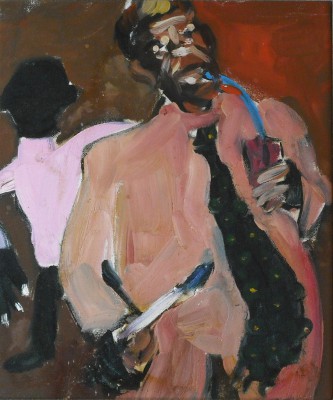