With a blend of impressionism and realism, Ritchie Eyma’s (born Haiti, 1967) work reflects the influences that shaped his childhood.  While he often paints familiar Bahamian scenes, his dense and patterned brush stroke and raw application of paint sets his work apart; his paintings exude light and depth.

Eyma grew up in Haiti in a household where one uncle was a ceramist and another was enrolled at L'Academie des Beaux-Arts.  The various artistic activities around him soon began to influence him so much so that his favorite places to spend time in Port-au-Prince became the National Art Gallery and the Galerie d'Art Nader.  His began by stenciling comic-book characters with colored pencils, and quickly moved to watercolors.   When he moved to Nassau, his art teacher at C.C. Sweeting Senior High introduced him to oils and acrylics.  After passing his G.C.E. 'A Level' art exam, oil became his medium of choice.

During the late 1980's and early 1990's, Eyma exhibited his work at the Central Bank of the Bahamas Annual Art Competition.  He also participated in numerous shows of the Longbranch Artists and Artisans.  After a decade of absence, he returned to his love of painting in 2003.  At the very first exhibition of the National Art Gallery of The Bahamas, one of his paintings, Fort Hill Houses, was accepted by the selection committee.  His first major show was the Minnis Family Exhibition in November 2005, where he exhibited twelve of his oil paintings alongside his wife, Roshanne Minnis, his father in law, Eddie Minnis, and his sister in law, Nicole Minnis.  In 2014, he again exhibited his work with the Minnis Family at The National Art Gallery of The Bahamas in a major retrospective entitled Creation's Grace. 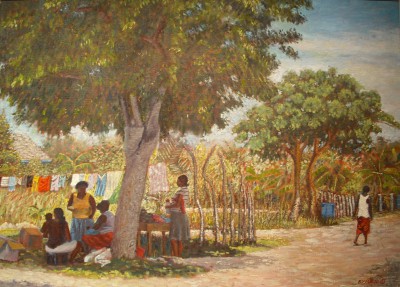