Jessica Colebrooke (born 1972, Nassau, The Bahamas) is the first Bahamian female tile manufacturer, a ceramicist and a trained teacher.  In 1996 she established Jessica’s Tileworks Studio and Gallery, the leading ceramic manufacturing company in The Bahamas, which produces art tiles, fine art pottery and souvenirs.

Colebrooke graduated in 1994 from The College of The Bahamas with an Associates of Arts degree, and in 1997 from Rhode Island School of Design with a Bachelor of Arts degree. She was a recipient of a Robbins Today Award in 1996 as the Distinguished Ceramics Major.  She has participated in various arts shows, including Sump’n Familiar at the Central Bank of The Bahamas, 1997, and a traveling exhibit titled White Columbus.

As an educator, Colebrooke has been a part-time art lecturer at The College of The Bahamas.  She also worked for 3 years with the Ministry of Education and conducted regular ceramic workshops over the summer months in The Bahamas.

Colebrooke began exhibiting her ceramics in 1995 in Providence, Rhode Island.  Her work has been shown extensively across The Bahamas as well as internationally.  In 2003, she was selected to be part of the Inaugural Exhibition of The National Gallery of The Bahamas.  In 2009, she was curator and participant in the first ceramics Ceramist and Potters of the Bahamas at the Popopstudios ICVA, Nassau.  In 2008 she was named Pioneering Woman Honoree by the Zonta Club of Nassau and selected as a featured artist for the opening of the D’Aguilar Art Foundation, Nassau in April 2010.  Colebooke has also hosted several annual All Ceramicists exhibitions in the Bahamas, inviting other talented artists to join her shows. 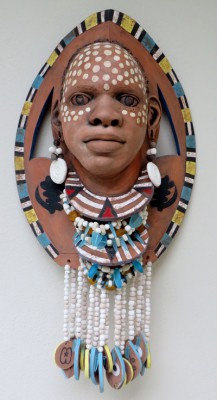