Stanley Burnside (born 1947, Nassau, The Bahamas) is an established painter and sculptor and has been an important artist and leader in the Bahamian art community throughout his career. Burnside's work tackles political and cultural patterns, and often draws inspiration from the role of the matriarch in The Bahamas. His artwork is distinguishable by what he describes as his “use of elemental and mystical symbolism rooted in his African heritage.”

Burnside has established himself not only as a masterful painter but as the premiere Bahamian cartoonist. He sketches out his social commentary in Sideburns, an editorial cartoon that runs daily in The Nassau Guardian and has for decades, except for a brief period when it ran in The Tribune. Having created over 10,000 cartoon panels since 1979, Mr. Burnside has displayed both his intelligence and wit while keeping Bahamian politicians on their toes and memorializing our pop culture and society in general.

After receiving his BFA and MFA from The University of Pennsylvania, Burnside spent time working the United States painting and designing album covers for notable R&B artists. After returning to The Bahamas, he distinguished himself as an Art Professor at The College of The Bahamas and as a principle designer for the Saxon Superstars and later the One Family Junkanoo Groups, and as a founder and co-creator of the artist collective "Jammin".

In 1991, after reconsidering his role as an artist, Burnside made the decision to organize the prominent artists in the Bahamas and establish the country as a hub for talented and world-class visual artists. The result of his efforts was known as B-C.A.U.S.E. (Bahamian Creative Artists United for Serious Expression) opened the doors for the artists to participate in a number of international shows. Burnside is also known for his collaborative work with the trio Burnside-Beadle-Burnside, along with his late brother, Jackson Burnside, and friend John Beadle.

In addition to his yearly shows in The Bahamas, Burnside has exhibited widely in venues such as France, Ecuador, Bermuda, USA, Venezuela and The Dominican Republic. His work can be found in collections such as the Museum of the Americas in Washington, DC and the Museo de Arte Moderno, Santo Domingo. 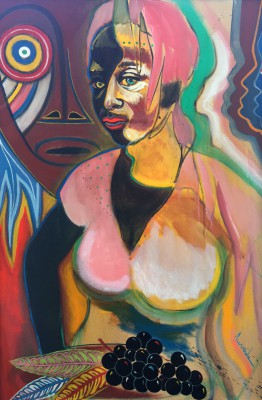