Jackson Burnside (born February 14, 1949; died May 11, 2011, Nassau, The Bahamas) was a noted Bahamian artist, architect and Junkanoo designer who grew up in The Bahamas of the 1950s.  He was educated at Lincoln University PA, and the University of Pennsylvania’s Graduate School of Fine Arts, where he obtained two Master’s degrees; one in Architecture from the Professional Degree program and the other from the Design Studio of Louis I. Kahn. While at Penn, he received the prestigious Arthur Spayd Medal for Excellence in Architectural Design.

Burnside practiced overseas as a professional architect for many years in the United States and England, and also worked on projects for Louis I. Kahn in Bangladesh, Iran, and Israel.  He returned to work in The Bahamas in the late 1970s and became the first Bahamian Senior Architect at The Ministry of Works.  He then moved on to head several architectural practices of his own, which focused on utilizing the “common sense” principles of Bahamian architectural heritage that favor design responding to its natural surroundings.  Burnside was sought after for incorporating the aesthetics of traditional Bahamian design into new buildings, both residential and commercial.  One of his signature architectural design projects is the world famous Marina Village at Atlantis, Paradise Island.

As an accomplished architect, Burnside’s design philosophy garnered many requests for him to lecture at universities and institutions throughout the United States and the Caribbean.  Burnside was a lifelong member of The Royal Institute of British Architects and the Institute of Bahamian Architects.

While growing up, he, like most others of his generation, was conditioned to believe that the only culture of merit “came from books that came from England.” His struggle to balance this premise against the merits of his African ancestry is a theme that runs throughout his work as both architect and artist.

As a visual artist, Burnside was well known for his bold, colourful, and complexly layered paintings that portrayed a ‘true-true’ depiction of Bahamian island life — its symbols, its culture, and its people of African heritage whom he painted with pride and affection. His work also closely examined the Bahamian environment within a stark social context for which he made no apology.

As a solo artist, his paintings have been exhibited in The Bahamas, the United States,  England and the Caribbean.  In 1991 he was a founding member of B-C.A.U.S.E. (Bahamian Creative Artists United for Serious Expression), a group formed to promote and support Bahamian artists.  He was also a part of the Burnside-Beadle-Burnside collaboration with fellow artists Stan Burnside (his brother) and friend John Beadle, in the development of a unique painting style that they called ‘Jammin’ where all three artists worked together on the same painting.

In the 1970s, he founded the innovative Doongalik Studios along with his wife, Pam, to establish The Bahamas as an international centre of creativity.  Their vision statement claimed that “by the year 2020 more persons would travel to The Bahamas for its art, culture and heritage rather than for its sun, sand and sea.” This quest was furthered in 2008 by the couple’s founding of another organization, Creative Nassau, whose goal was to apply to the UNESCO Creative Cities Network, requesting that Nassau be designated an international City of Crafts and Folk Arts.  This prestigious designation was confirmed in 2014,  three years after his death.

Burnside was actively involved in community and cultural affairs, particularly in his role as a member of Junkanoo. He was a design leader of the Saxons Junkanoo Group for many years before leaving to become a founding member, designer and conch-shell blower in the One Family Junkanoo and Community Organization Group in 1993, later becoming its Chairman Emeritus.

Burnside’s ability to move from Junkanoo art shack to lecture hall won him numerous awards and honors as a cultural advocate, including The Bahamas Chamber of Commerce’s Distinguished Citizen’s Award for the Creative and Performing Arts, the E. Clement Bethel Award for Excellence in the Arts.  He was also inducted into the National Junkanoo Legends Circle.  In 2014, Burnside was posthumously recognized as a “Cultural Warrior” by the Government of The Bahamas during the country’s 41st Anniversary of Independence.

Burnside’s artistic journey is examined in two DVDs written and produced by Karen Arthur and Tom Neuwirth. The first is Artists of The Bahamas in which he was interviewed along with 10 other Bahamian artists; and the second — a documentary made after his death —Jackson Burnside III, Native Son. 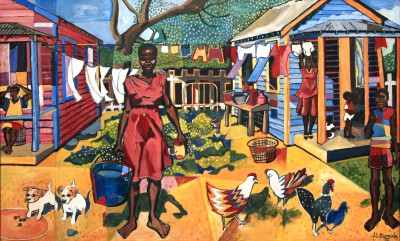