Haitian Works from The D'Aguilar Collection

Brief History of Art in Haiti

1850 – Emperor Soulouqe founded the Imperial Academy of Drawing and Painting in Port au Prince.  This closed after 9 years.

1863 to 1930, various other small private art schools open, encouraging painting, drawing and sculpture within a very small segment of the population.

1943, An American, DeWitt Peters, comes to Haiti to teach English in a program sponsored by the United States Embassy.   After teaching for a period and travelling throughout Haiti,   He noted “there was no (organized) art (programs) in Haiti, and this seemed extraordinary in a country of very great natural beauty, with a clarity of atmosphere comparable to that of southern Italy, inhabited by a charming people rich in folklore and tradition.”   He made contact with the President of Haiti at the time, Elie Lescot, and with Lescot’s blessing, he received permission in

1945 to convert a grand abandoned house into the Centre d’Art.   This centre was used to hold art classes, exhibitions, and became a meeting spot for many new artists.  The Centre was funded equally by the Haitian Govt. and US Department of State, and it gave birth to an entirely new generation of Haitian artists.  10 of the artists who were early members of the Centre are in our collection:   Wilson Bigaud, Prefete Dufaut, Georges Liautaud, Gerard Valcin, Bourmond Byron, Saincilus Ismael, Robert St. Brice, Seymour Bottex, Alexandre Gregoire, and Luckner Lazard, and you can see that their work is what we call naïve or primitive, with limited perspective. The success of the Centre d’art and the international discovery of Haitian art fosters a “dazzling explosion of works so deeply distinctive, so willfully diverse that the accumulated creations are like a vast treasure trove.”  Various “schools” of art arise in many parts of Haiti, and it seems that in a few short years a whole nation is painting and creating.   Some of the other dominant art centres include:   Saint Soleil, founded by Tiga Garoute in 1974, where he was later joined by Levoy Exil and Prospere Pierre Louis.  Several of the artists in this group show the influence of Voodoo in their work.   The “Voodoo” artists, led by the master Hector Hypolite, who paints for only three years after being discovered by Dewitt Peters.  Andre Pierre is esteemed to be the spiritual heir to Hector Hypolite.   Some of the more successful artists later go to France to study, including Luckner Lazard and  Roland Dorcely, where they gain exposure to new techniques and styles that they share with their countrymen upon their return to Haiti, reflected in their work.   Work of more contemporary artists such as Favrange Valcin, Valcin II, reflects formal art training at the Brooklyn Museum School of art. 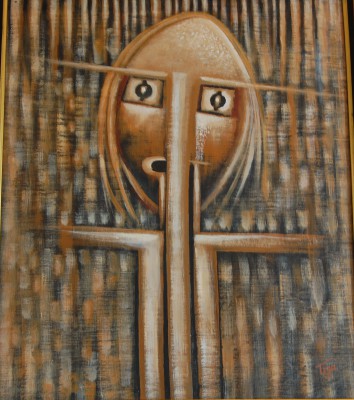 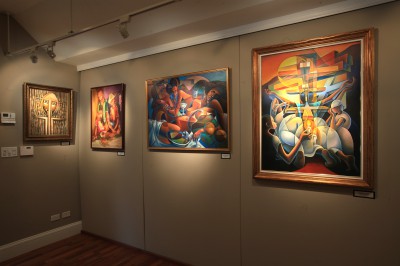