wait. I saw something

An Interview with Heino Schmid

The conception of ‘wait. I saw something’ grew out of few obsessions: preoccupations with figure, minute moments of touch, and the emotional conversation that grows out of small exchanges. Heino Schmid’s recent work magnifies the subtlety of the way we move in the world. His pieces are massive renderings of little moments; with them he narrates stories that are told silently, between the brush of fingertips and shared glances across crowded rooms.

I visited Schmid’s studio late on a Thursday so that he could tell me these stories. He eventually presents me with a parable. “Honor the small things,” He says this carefully, choosing words with calculated reverence. “If you honor those smaller things, good things will come out of your work. Your life.”

Schmid’s artwork has grown out of this idea. He understands art – maybe life – through a macro-lens, in which smaller things fill the entire space. This preoccupation first manifested into a focus on technicality; eventually though, Schmid’s subject matter became the catalyst by which his obsessions are displayed. ‘wait. I saw something’ is just a snapshot in this artistic history. In this particular exhibition, the audience is invited to peer into the private exchanges between the subjects within his paintings.

LETITIA PRATT: First, I want to understand you as an artist. What has been the primary focus of your work during your career and how does it shape your point of view?

HEINO SCHMID: The focus...has shifted. I’ve been lucky to always consider art … as a way of participating in life and in the world. So as I change, my focus changes. Like anything. Like any relationship it just…It just evolves. When I was younger, it was just proficiency. That was really important to me. I always found it kind of ridiculous that artists would spend a year on a painting or something like that.

HS: When I was younger, yeah. It was romantic but, I wanted to make something every day. Getting older I have slowed down a bit. When I was seventeen-eighteen and just started making work I used to draw every day and I would, you know, make two-three pieces and I thought they were good. That was also ignorance because I didn’t see how repetitious or overly simplified my work was then. But eventually that evolved into technical proficiency. So alright, I got some practice in, that’s good. Now let’s really learn this thing. Look at other artists. Look at material. Learn at how to mix your paint. Learn about drawing. Learn what I am interested in. Then the technical side of things sort of slowed down. And recently I have been blurring the two of them…I don’t focus as much on technical proficiency anymore and I’ve kind of…gone back to this idea of immediacy – but with a slower, older brain. Making sure that even though the approach can sometimes be immediate, the content is meaningful – and slow. If that makes sense.

LP: It does. What have been the themes of your work, though, as they developed in your artistic history?

HS: It usually revolves around – very loosely around a bit of narrative – and the figure. I go back to [it] all the time. The first time art really made sense to me was in a figure drawing class actually. Its something I tell students now – and it sounds very simple – but it’s the skeleton that you have to be aware of. I don’t know if you have been in any figure drawing classes or ...

HS: Well if you have a figure… its different than if you draw a bowl - you render it. you just shade it, you catch the light, and the rest of it. But with the figure you can have that outcome but you don’t – it doesn’t happen unless you understand that there is meat on bone. The skeleton has to be the undercurrent. That was the first time art made sense to me. This is the same way I look at all art. I could be looking at the most minimalist installation…a sound piece or something like that and I would be wondering …where is your skeleton? Are you just rendering? What is your core… and is that meaty?

LP: And does this bleed into the work that you’re doing now?

HS: It does, it does. I was saying that to say that I draw the figure quite often when I get stuck. I don’t always work with the figure but…when stuff gets really formal that thinking has always been beneficial and, by extension, the figure has always creeped in.

LP: To help your Artist’s block.

LP: Tell me about the narratives.

HS: Umm… I don’t know, it’s odd things. It is never really big moments – I don’t remember the big moments. People say to me, [quoting] ‘remember that time we were on a roller coaster and there was an explosion and we all thought we were gonna die?’ and I actually don’t remember that at all. Like the painting on the invite of the family [holding hands, praying]… I remember being out to dinner – at The Poop Deck or something – and there was a family that just decided to say grace publicly…and it was such an odd thing, it made me smile because everyone – almost all of the restaurant – kind of, noticed and let them do them. I like that, that was nice. That was years ago and it just stuck in my brain and I thought it was important. So you know …little things. I think everybody’s the same.

LP: Well I think artists do that a lot. Artists…I think have to be a little bit obsessive…to really notice the minute ways people interact with each other and that would inform your work. When I was viewing your work, I found it to be very intimate, and the process of viewing seemed almost voyeuristic in a way…like I’m spying on something private.

HS: I could see that. Yeah, it’s just the little things. But I think they’re big things.

LP: Is that why you make them big?

HS: [laughs] I do think there is something to be said for…again just like meat on bone. All those little things that define the way people move in the world. I find that quite interesting. Like the way you and I are sharing oxygen right now. There are lots of those moments and sometimes they’re very profound...but they’re few and far between. I think good things come out of smaller moments and I guess my philosophy is that…if you honor the smaller things, then good things will come out of the work, in life, in a way, in a big way. Lately it’s become quite specific in that regard…sometimes little moments can be really aggressive and you have to be responsible for how you portray them….and sometimes they can be really soft.

LP: Which is most of the show.

LM: Okay one last thing: why the name?

HS: Same reasons I told you. “wait. I saw something…” I think that’s where the work is going right now. It’s just I saw…little moments…that just…stick. 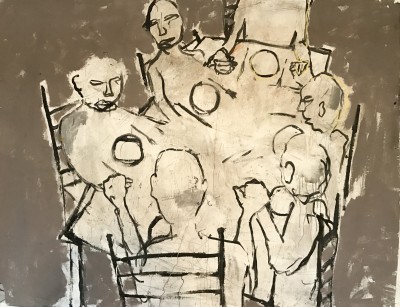