The D’Aguilar Art Foundation is delighted to announce the opening of Diversions, an exhibition of photography by artists Melissa Alcena, Alessandro Sarno and Sofia Whitehead. Diversions features three series of works that explore the spaces outside the demands of daily life in The Bahamas.

Alcena, Sarno and Whitehead capture their subjects in different processes of diversion. We see people outside of schedules, putting down obligations and forgetting concerns, instead committing to relaxation and play. In a time when racial and political concerns are so tender and consuming, these images offer a glimpse into our methods of untethering and unwinding. We gravitated towards these particular photographs because it also gave us, as viewers, a way to escape.

Alcena and Whitehead, both Bahamians, pay witness to their experience of returning home, a passage and re-entrance that is both routine and complex for Islanders. Their photographs showcase the deeply familiar way they encounter their subjects and landscape; acting almost as document. Sarno, a native of Italy, is a tourist that has immersed himself in Bahamian life. His interest in travel and observing the lesser-known routines of Bahamian-life reveal the photographer’s own form of escapism.

'Diversions' brings together photographs that describe the candid joy of downtime.

Melissa Alcena (1988, The Bahamas) went to Canada in 2010 where she attended Sheridan College in Oakville, Ontario and completed a 2 year Applied Photography course in 2012.  Melissa’s approach to portraiture is environmental. Photographing her subjects in their surroundings, she highlights aspects of their lives and personalities.  This will be her first public exhibition.

Alessandro Sarno (Italy), finds inspiration traveling around the Islands of The Bahamas; his photography focuses on the vernacular, on the indigenous expressions of people he encounters, on landscapes, wildlife. He is drawn to the intricacies of Bahamian life: worship services, concerts, funerals, civic activities and all the little details that emerge in between. He published two coffee tablebooks, Blue And Beyond, and Catch Da Cat, to portray life in The Bahamas. He held his first solo exhibition at the Ladder Gallery in Nassau in 2015.

Sofia Whitehead (1990, The Bahamas) received her bachelor in Business administration and marketing from the Universidad ORT Montevideo, Uruguay. Her love of photography led her to continue her studies in courses such as Black and White Photography at Foto Club Uruguay, and Photoschule in Vienna, Austria. In 2014, Sofia returned home and began photographing and interviewing women throughout The Bahamas for a project called ‘Project Bahama Mama’. Her research will be compiled in a book to be published in 2018. Sofia exhibited earlier this year in The Bahamian Project Exhibition Central Bank. 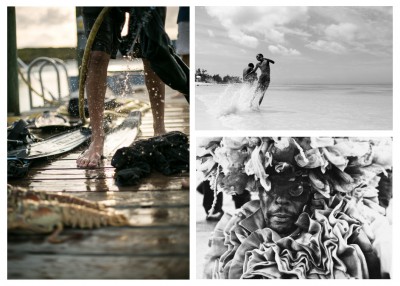