The D'Aguilar Art Foundation proudly presents a solo exhibition by Maxwell Taylor, in which richly orchestrated prints pay homage to family, nurturing matriarchs and the ceremonies of a happy home.

This bold and technically complex body of work was created during two recent Artist residencies, at Robert Blackburn studios, New York (2015), awarded by The DAF, and Art in Residence at the University of Tampa, Florida (2016), and sees Taylor rework subject matter familiar to him through the breadth of printmaking techniques.

Discovered as an artist while still a schoolboy, Maxwell Taylor (born 1939, Nassau, Bahamas) was first tutored by Don Russell, and later apprenticing at the fabled Chelsea Pottery as a ceramic designer alongside Brent Malone, Eddie Minnis and Kendal Hanna.

Taylor believes that the technique should fit the theme and uses many creative combinations to achieve his vision.  He is renowned for his ceramics and paintings, but it is in printmaking that he really excels.  He created the Immigration Series using the ancient technique of “cutting wood” but in a challenging large format.

Taylor lived in New York for many years, studying at the Art Students League of New York from 1968 to 1972, then taking further studies in photo silkscreen at The Pratt Graphic Center in 1972 and printmaking at Bob Blackburn’s Printmaking Workshop from 1969 to 1977.  After twenty years in New York, during which he worked on construction sites to support his artistic practice, he traveled south to the Carolinas and then to Europe. Taylor currently lives and works between The Bahamas and Florida.

His work was exhibited at the 1968 Olympic Games in Mexico, at The International Printmaking Exhibit, 1971 in Santiago, Chile and in 1977 as part of the exhibition Bahamian Art Today at Brent Malone’s Matinee Gallery.  He held a one-man show in 1979 in Nassau and in 1983 was part of the group of ten artists selected to celebrate the 10th anniversary of Bahamian independence.  In 1991, he founded B.-C.A.U.S.E. (Bahamian Creative Artists United for Serious Expression), with Brent Malone, Antonius Roberts, Stan Burnside, Jackson Burnside and John Beadle.

He has participated in numerous solo exhibitions and his work is among the collections of the late Nat King Cole and Sir Harold Christie. Taylor was awarded the Southern Arts Federation Fellowship award for works on paper by the National Endowment for the Arts.  In 2009, the National Art Gallery of the Bahamas mounted a major retrospective of Taylor’s work in an exhibition titled “Max Taylor: Paperwork, 1960-1992”, which featured a great number of his emotionally-charged large scale woodblock prints. 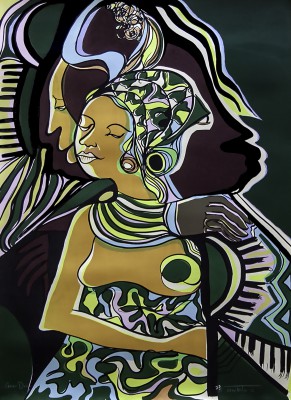